I keep sailing on in this middle passage. I am sailing into the wind and the dark. But I am doing my best to keep my boat steady and my sails full. 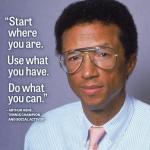 Born on July 10, 1943, in Richmond, Virginia, Arthur Ashe became the first, and is still the only, African-American male player to win the U.S. Open and Wimbledon. He is also the first black American to be ranked No. 1 in the world. Always an activist, when Ashe learned that he had contracted AIDS via a blood transfusion, he turned his efforts to raising awareness of the disease, before finally succumbing to it on February 6, 1993.

“Start where you are. Use what you have. Do what you can.”

You are never really playing an opponent. You are playing yourself, your own highest standards, and when you reach your limits, that is real joy.